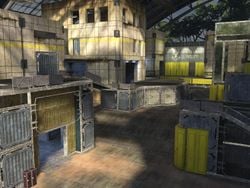 It is a large indoor environment with different close-quarters environments, including small buildings and tight corridors, that is used by veteran drill instructors who favor hands-on combat training, as opposed to more advanced methods such as a War Games simulator. Regardless, the training facility was later replicated into a War Games simulation by the UNSC.[1] There is a mock-up of a Kig-Yar Sniper on a three-story building, and also devices built into a wall that when triggered by nearby movement, will display silhouettes of armed Jiralhanae, supposedly to simulate a combat environment.

UNSC B Training Facility also has an airbase outside that has several D77H-TCI Pelicans along with a pair of M831 TT Warthogs and Scout Warthogs. The base also stores ASRGAM 10X missiles.

It is the setting for the Halo 3 multiplayer map, The Pit. The Pit's Halo 4 remake, Pitfall, has an identical layout and similar visual design, but is set in a different in-universe location.