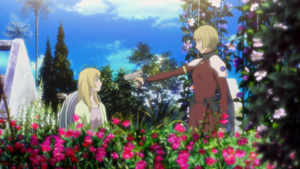 Daisy-023 confronts her flash clone, using a wheelchair due to metabolic cascade failure.

Metabolic cascade failure is a medical condition suffered by flash cloned human beings.[1] It is a series of neurological diseases that occur in short succession, typically rendering the human dead within the span of a year. Metabolic cascade failure is the eventual fate of the majority of flash clones, although select few are projected to live a normal lifespan. Because human flash clones are grown a hundred times faster than natural-born humans (hence the name), many anomalies appear. The clones lack the muscle memory and socialization of their hosts. While these problems can be remedied with intensive therapy, compounding biological defects cannot be corrected. Rapid flash cloning of such immense volumes of tissue induces gross DNA base-pair errors; congenital defects increase 42 percent and incidents of Parkinson's-plus syndromes increase 67 percent. The average half-life of a human flash clone is 14.7 weeks in laboratory conditions.[2]

Most of the clones used to replace the SPARTAN-II children succumbed to this condition. Contrary to Dr. Catherine Halsey's expectations, many of the clones lived far longer than previously estimated based on laboratory conditions,[3] with at least four surviving until 2525.[4]

While the biological degeneration of the SPARTAN-II flash clones is described in multiple sources, the condition is only identified as "metabolic cascade failure" in i love bees.