From Halopedia, the Halo wiki
(Redirected from Hydrazine)
Jump to: navigation, search 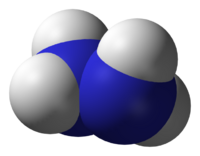 A model of a hydrazine

Triamino hydrazine is a fuel used by the UNSC. The root material, hydrazine, (N2H4), has been used as a rocket fuel since Earth's Second World War.

Triamino hydrazine is also used as a fuel for propulsion pods on some civilian commercial freighters, such as Horn of Plenty.[2]