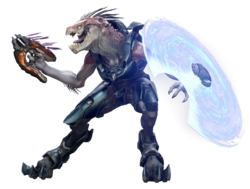 Ibie'sh is a somewhat isolated, volcanic continent on the Kig-Yar homeworld of Eayn, home to the Kig-Yar subtype known as Ibie'shans. The continent is rarely visited by outsiders, leading to the Ibie'shans developing in isolation.[1] The majority of the Kig-Yar serving in Jul 'Mdama's reformed Covenant can trace their ancestry there. More noticeably reptilian than other Kig-Yar, the Jackals of Ibie'sh show the least physical change from the species' common ancestor of all of the three main varieties of Kig-Yar, the other two having evolved more noticeably avian features.[1] They have blunt beaks similar to those of the T'vaoans, though their maws are much larger. Their necks are far more muscular than those of other known Kig-Yar breeds.[2][3] Despite their major physiological differences, the Ibi'eshans are capable of interbreeding with the other Kig-Yar subtypes and have no marked cognitive differences.[1]