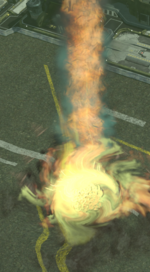 A MAC round fired from space as part of orbital bombardment.

Nils Thune: "Space? Those things even make noise in zero-gee?"
Ponder: "If you’re inside a MAC ship when the cannon fires? I don’t know if you’re a religious man, Governor. But it’s a little like a church bell—"
— Governor Thune and Captain Ponder discussing MACs.[1]

The magnetic accelerator cannon[2], also referred to as a mass accelerator cannon[1] or MAC, is a type of starship-mounted weapon system employed by humanity, primarily the spacecraft of the United Nations Space Command. MACs are coilguns used in military applications, though similar technology can be used in civilian mass drivers for industrial use.

MACs are fitted as a standard armament on most UNSC Navy vessels, ranging from small Gladius-class corvettes to Marathon-class heavy cruisers and even carriers or refit civilian ships such as the Phoenix-class colony ship. With a handful of exceptions, MACs are typically spinally-mounted, meaning that the entire ship is built around the gun, with the cannon running a significant portion of the length of the ship's stern. However, the technology is not exclusively used in spinally-mounted MAC guns, with naval autocannons (themselves sometimes referred to as "MiniMACs")[2] and even ground-based weapons such as the M68 Gauss cannon and M99 Stanchion operating on the same principle.[1]

An animation of a coilgun's operating principle.

A cross-section of the MAC found on Cairo Station.

This process differs from that of a railgun - a similar weapon system which feeds electrical current through a projectile to accelerate it along two conducting rails.

To fire a MAC, UNSC ships must draw power from the fusion reactor into a series of capacitors, storing the generated energy for firing. As such, charging the MAC draws power away from other sub-systems such as engines. As such, a MAC can be pre-charged and fired when ready, though at the cost of power to the aforementioned systems. Without the charge being maintained, the charge level does deteriorate. However, MACs can be fired at lower charge levels than 100%[3] though likely to lesser maximum velocity. Likewise, firing the weapon at lower charge rates would also allow the weapon to fire more often, if needed.

MACs are capable of firing a wide array of munitions, depending on bore and model. Some MAC rounds are extremely dense and constructed of ferric tungsten[4], noted by Captain Wallace of the frigate UNSC Commonwealth as a "heavy round".[5] In the case of the MACs fitted onto the refit-colony ship UNSC Spirit of Fire, the rounds fired from its MACs are "ultra-light" or consist of depleted uranium slugs.[6] Other munitions that can be fired from MACs include semi-autonomous drone missiles[7] and for the larger 27 metre guns of UNSC Infinity, even include cargo pods and small spacecraft.[8] A special kind of MAC round fired by the refit-UNSC Pillar of Autumn was composed of a ferrous core and an outer layer of tungsten carbide, which allows the round to splinter on impact with an enemy vessel similarly to the shredder rounds fired by an assault rifle.[9]

Due to this variation, the masses, velocities and sizes of MAC projectiles can very, ranging from 10 metre-long, 160 ton models fired by frigates and cruisers[1], to 600 ton depleted uranium models fired by Paris-class heavy frigates[10] up to 3,000 ton projectiles accelerated to "point four-tenths" of the speed of light by the orbital defense platforms above Reach.[11] The MACs of UNSC Infinity are additionally capable of firing various "sub-caliber" munitions for its massive twenty-seven metre bore, alongside some of the special types mentioned prior.[12]

Battle Group X-Ray firing their MACs at a Covenant super-destroyer.

"MAC rounds? In atmosphere?"
— Jorge-052 exclaiming his alarm at the intent to fire the MAC of UNSC Grafton during the Fall of Reach.

As some of the largest and most destructive weapons available to humanity, their use is primarily constricted to space warfare. Most UNSC spacecraft are equipped with some form of spinal MAC gun, requiring the vessel to manually turn and face the target it wishes to fire on. MAC rounds are often fired in concentrated volleys by fleets of coordinated warships, and used as a long-ranged weapon for "sniping" enemy ships out of the sky. During the war against the Covenant, human MAC volleys were often fired in concentration, aiming to overload a target ship's energy shielding.

Atmospheric use and orbital bombardment

In select circumstances, MACs can be employed in-atmospheres or for the purposes of orbital bombardment.

MACs are primarily divided into two distinct classifications; light MACs and heavy MACs (also referred to as Light Coil and Heavy Coil). Overall MAC generations are denoted as Marks, with specific models given a unique identifying code. Heavy MACs appear to be typically fitted on mainline fighting vessels such as those of the Autumn-class cruiser and Strident-class heavy frigate, while light MACs are predominantly fitted on lighter warships such as the Charon and Stalwart frigate classes, ships not intended as line warships such as the Epoch class carrier or ships historically considered under-gunned as capital ships, such as the Halcyon-class cruiser.

Some of the largest MAC types, such as those found on select orbital defense platforms and large warships, are referred to as "Super MACs".[11][13]

The Mark II MAC is a light coil system, with its variants found on the Charon and Stalwart frigate classifications, alongside the Epoch-class carrier and refit Halcyon-class cruiser.

The Mark IV MAC is installed on the Strident-class heavy frigate.

The Mark V MAC is part of the "Super MAC" classification of MAC. This MAC is the central armament of the orbital defense guns stationed over Reach in 2552[11] and the Moncton-class orbital weapon platform over Earth.[22] The Mark V Superheavy MACs found over Reach were capable of accelerating a 3,000 ton projectile to "point four-tenths" of lightspeed.[11]

The Mark IX is a heavy MAC fitted on the Autumn-class heavy cruiser.

The Series 8 MACs are fitted onto the Infinity-class supercarrier - nameplay the lead ship of the class. Series 8s were intended for inclusion on the UNSC Eternity, though the weapons were since installed on Infinity as an upgrade package.