He's with the Believe event makers - but friends with the Chief? I don't think he has anyone he considers his friend - he forced himself to be distant from everyone, even his fellow Spartans to a degree. Honour Light Your Way - Kora ‘Morhek The Battle-Net My Conquests. 02:26, 8 October 2007 (UTC)

I don't think any of us wrote it. It's directly linked from http://www.xbox.com/en-GB/games/h/halo3/jakecourage.htm, so I'm guessing an actual employee wrote it. 15:48, October 8, 2007

A Note: In the image "Limb" it states that the image is of a marines hand still holding a Magnum Pistol. It is clearly a Spiker not a Magnum and the hand is a brutes hand as it only has 3 fingers (excluding the thumb). SilverSword 23:21, 21 April 2008 (UTC)

Actually you know what, the photos are filled with inaccuracies, Spiker is a "Nail Gun", Scarab Landing Craft bringing reinforcements, and other things. Nice Images though. SilverSword 23:40, 21 April 2008 (UTC)

To everyone, you should know that this is not purely canon as S-117 did not participate in the Second Battle of New Mombasa as stated by Bungie. If you already know about this, then refrain yourself from putting counter-claims...H-107 Subtle Tank 21:07, 9 May 2008 (UTC)

(indent reset)As for the inaccuracies, let's try to have some willing suspension of disbelief. It is a made-up universe after all, and the creator of "Jake Courage" has the right to make him friends with the chief. Plus, a spiker does fire nail-like spikes, and MA5B and MA5C look similar and were used at the same time (2552). The one problem with the hardworking people here at Halopedia is that they are sometimes over-critical, and are reluctant to accept a new facet of the Halo universe if it disagrees even slightly with the established "Canon". Sometimes, imagination trumps canon. I think the addition of a civilian war photographer is a great idea.

Plus, I think Jake Courage is the protagonist from "Second Sunrise over New Mombasa", the last story in the halo graphic novel. After all, that guy was a controversial war photographer who was present in Mombasa.
Big Bad Wolf 18:53, 20 November 2008 (UTC)

I havn't seen this guy in Halo 3, nor have a seen a photograph or photographer in Halo 3. Gruntijackal

If it is the Xbox.com link then yes, and it still has no info on him being in Halo 3. There isn't even a picture showing him in Halo 3. Gruntijackal

Reply to a past comment: Just pointing this out to whoever the person who said this was, but the MA5B and MA5C were NOT used at the same time, MA5C was the Halo 3 one.Papayaking 19:59, September 21, 2009 (UTC)

Why would the ONI waste valuable resources on covering up something when the UNSC was on it's last legs? I would think they'd be more concerned with researching the Ark then covering up a giant battle that multiple memorials are dedicated to.--Sgt.T.N.Biscuits 06:57, November 27, 2009 (UTC)

Is this really Canon? "made from titanium and cockroach shell" Cockroach shell? The xbox.com guy who wrote this stuff is a really bad author...is there a chance to remove this fanfiction from halopedia? MT

Articles aren't removed for being non-canon or part of a challenged canon. Xbox's work doesn't count as "fanfiction". The Fanfiction rule only applies if for instance... you created an article here called Jane-117 and start writing that MCPO John-117 is actually a girl.-- Forerunner 20:39, January 22, 2010 (UTC)

Guys from the Xbox magazin schouldnt be authorized to write storys for Halo...everything like this demolishes halos authenticity.—This unsigned comment was made by 79.240.138.29 (talk • contribs). Please sign your posts with ~~~~! 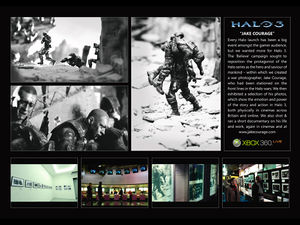 No proper photos to begin with. Courage's collection of photos is a simply a film still with a monochrome filter of everything you see in Believe's Diorama. You can check out this old video of what his photos look like.— subtank 13:57, 22 April 2013 (EDT)
Edit: what I got from a quick search. — subtank 14:18, 22 April 2013 (EDT)

Anyone else ever think the person with the initials "JC" that sent Dr. Halsey the note of the moving object in the photograph of NGC-2244 (included in the Reach Limited Edition materials) may have been Jake Courage? -ScaleMaster117 (talk) 21:14, 1 February 2014 (EST)

He was a war photographer for the UNSC but what did he do before that? The space photo is from 2524 taken by the Mars location of the Canada-France-Hawaii Telescope and may or may not have been photographed by Jake Courage himself (the picture was taken before the Covenant was known) perhaps he worked at the observatory on Mars or was in on some of the talk about the mystery object revealed by that photograph and he knew Dr. Halsey as both were on Reach at the time. He started as a photographer on Reach in 2527. It's mere speculation, but given Bungie's history, it's not beyond them to name drop a character from Halo's past just for the sake of it. Or it could be a random JC that has no bearing to an established photographer character with those initials. :) -ScaleMaster117 (talk) 16:07, 2 February 2014 (EST)