Don't have an Xbox 360? Don't want to wait to get the honor to play Bungie? Want Recon!? Well here's your answer! 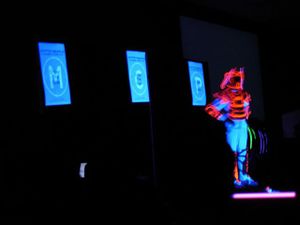 "It's Bungie Day, and I feel like handing out some Recon. So let me tell you a story...There's a cool event that happens every year or so at Microsoft called Puzzlehunt. Teams of a dozen, many of whom work at Microsoft, spend an entire weekend without sleep solving puzzles created by that year's hosts, fitting into a theme. Two years ago (when we were still at Microsoft), the team hosting Puzzlehunt 11 invited me to join them in writing game-themed puzzles. How could I resist coding a puzzle into the stats result of a made-up game of Halo 2? What's more, the guys at RvB were about to stop by for an early look at Halo 3, so I whipped up a quick script and asked if they'd perform and record it. They were happy to, and it became the intro to this puzzle. The puzzle been sitting, hidden, on Bungie.net for almost two years since then, so just for fun, we'll let you take a crack at it for a chance to win Recon. Be warned: it's not at all easy, since it's meant to be a challenge to the types of people in and around Microsoft who spend a weekend each year solving puzzles for 36 hours straight. But it is solvable, since most of the teams got it. Keep reading to see how you can get Recon."
— Bungie.net

Well here's a (Extremely Hard) fairly simple way to get the famed and prized Recon Armor sought after by most of the Halo community.

To see even more details about this challenge, check out this link at Bungie.net here!

Note: The winners have already been decided by Bungie, and the answer posted.