A week and a half into the long awaited game we've been so happily playing in our rooms, dorms, and more rooms. 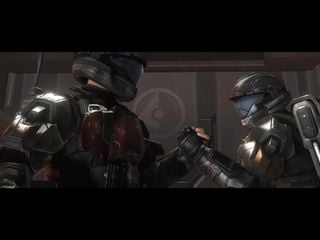 Well, as you can all read in the intro (I hope), I've seen on my "friends" list Halo 3: ODST down 8 - 15 lines down the list. Of course, I expected that, but what about a review? I actually waited for someone to do so, but you peeps were having too much fun with you're new game... so was I :). Before you read, I'm basing this on my opinions and my opinions only. I respect yours on the comments below, but make sure their clean.

Lets start out with the characters. First of all, Edward Buck, the most true of all those bada** Marine NCO's, was the character that stood out more. Unlike the Rookie, who was just a bridge to find out what happened to you're squad, Bucks relationship with Veronica Dare and his squadmates highlighted the points of the game. When I meant "points", I really meant the witty remarks he said and moods he displayed to, for example, a wounded Romeo when he was wounded by the Chieftain, how Buck defiantly threw aside the empty can of Biofoam as a sign of, "Get up, fight, and shut-up." In my opinion, Buck was a character that displayed those Halo Characters online that displayed masculine formality and rough-play to other gamers as a sign of, "Get out, I win, boo hoo for you."

Now, Romeo, the sniper that coincidentally saved Bucks life from a harmless-curious "Engineer", is the ladies man, and of course the fail-at-sarcasm guy. "I take it back, Navy got its butt kicked", would you like a cookie Romeo? No? then shut-up. Now, Romeo IS one of my favorite characters, but life is handed back to him when he was impaled by that Brute Chieftain. This goes to show you Bungie isn't messing around with sarcastic fools online as well. Just like Buck, Romeo displays those cocky "I'm good at sniping/MLG players" gamers.

Michael Crespo, the demolitions expert, and the PFC of the group. As a few of you seen, Mickey is my favorite character bar none. Dropped farthest away from his squad, Mickey displays the common gaming character online. Goes with the flow, loves the tank, and definitely loves explosions. He's not all noob though, handling himself in some situations, Mickey also represents the squad member of the team that's like a kid, listen to his voice, holy crap I laughed. His question to the retreating Marines also displayed his situational awareness... below zero.

Alright, we head to the Rookie next... lets put it this way, he's Master Chief with new armor and a lot more silent, go figure.

Taylor H. Miles, Dutch, the heavy weapons expert. As you all probably noticed, he might be religious due to his friggen awesome jump he did through a hole he drove through. He's pretty big, a veteran just like Buck but with less tours and a knack to be all serious (why so serious?). Whats random is the fact he doesn't like to fly, commenting to those F99 Wombats that he'll "keep his boots on the ground." Why join the Maniacs when they just love to drop. Another thing, he seems to represent those gamers who concentrate a lot on the game. I've seen those type of gamers upon their onslaught, so much terror, so much destruction.... so much fail. I do have to say this, he was one of the characters, next to Mickey, to be less looked upon and described, besides from those ViDocs.

At last, certainly not the hot one, Veronica Dare comes into the picture with the famed and most coveted Recon Helmet. She, again in my opinion, represents Bungie as a whole with their tactical awareness and a history of keeping things secret, only to reveal them at a right moment to have a big surprise for those fans. Quick with the Automag, she has a heart for Buck, as for Bungie with some fans, but deadly and quick to punch (Ok, I cracked up when she nailed one on Buck) on those who mistake her for a hot woman in a modified suit (yeah... ok).

Well that's all I got, its late, and I'm gonna do other stuff.