That's always good advice, particularly when you’re playing Halo®: Combat Evolved and you’re the only thing standing between Earth and its destruction at the hands of the Covenant.

There are a lot of different types of enemies in Halo—some are worthy adversaries, and others are just fun to kill. Now, in this document, you have a how-to guide for creating maximum mayhem. So, find a pen and paper, and take careful notes, class. There will be a quiz.

Grunts are the backbone of the Covenant army. Although weak on their own, they gather strength in packs and often follow a Covenant that is higher in rank. You can expect them to carry a wide variety of weaponry, including Plasma Grenades.

Melee attacks work well on Grunts. As a target, they are a waste of ammo. If there’s a large group of them, throw a Fragmentation or Plasma Grenade in the middle of the group and gun down any others that try to jump away from the blast radius. If you don’t have any grenades handy, mow them down with an Assault Rifle.

Usually known as the sergeants of the Covenant group, Elites come in multiple colors and frequently use active camouflage. The most powerful of the Elites are the Gold Elites. Their defining feature (other than their signature color) is that they carry the deadly Plasma Sword. Elites are also protected by an energy shield that recharges, like yours. 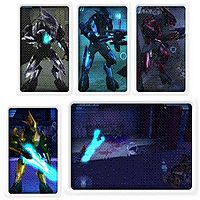 The most effective method of killing this enemy is to use a few rounds of any weapon (preferably the Assault Rifle) to weaken its force shield. Then, use two or three melee attacks to finish it off. For active camouflaged Elites, avoid using melee attacks, since they’re hard to see. A better option is to gun them down with the Assault Rifle or Shotgun.

The most fearsome Covenant creature is the huge Hunter. It comes equipped with a destructive Fuel Rod Cannon that’s normally fitted to Covenant Banshees. In other words, it packs some serious heat. Its enormous shield not only protects it from most gunfire, but the shield also serves as a melee weapon in close combat.

When the Hunter is in combat position, it withdraws into its highly protective blue-plated body armor. When relaxed, it exposes its Achilles heel: the soft, dark, orange flesh around its neck and mid-section. Target this exposed skin.

This Hunter is no match for Master Chief.

Your weapon of choice should be something long-range, such as the sniper rifle or, better yet, the rocket launcher. While armed with the Rocket Launcher, forget about finesse—just aim at the ground near its feet and fire. Aiming for the torso is risky, as the rocket can easily miss its target, should the enemy side-step your projectile. Splash damage from impact with the ground underneath the Hunter will weaken its health. If you’re using the Sniper Rifle, wait until the Hunter is relaxed and not in a defensive combat position. Again, aim for the orange fleshy parts at its neck or midsection area (especially its back) to deal the most damage.

If you don’t have any long-range munitions, you can still bring down the powerful Covenant Hunters, if you’re careful. If you have a shotgun, one blast directly to its exposed back will take it down, regardless of what difficulty you are playing. With other weapons you need to be nimble. Use circle strafing in combination with melee attacks.

In the Covenant army, Jackals are loners that scout out areas for Elites and Grunts. The strong energy shield that expands from their wrist is almost impervious to small arms fire. Their weapon of choice is the Plasma Pistol, and they often use the pistol’s stun-charge capabilities.

Jackals scout out areas for Elites and Grunts.

To defeat a Jackal, go for a straight-on melee attack to its wrist shield. Then, while it’s staggering from the initial attack, use another melee hit or a few rounds from your favorite weapon (like the Shotgun) to finish it off. Otherwise, try to circle-strafe around the enemy and gun or melee it on the unprotected side.

The Spore are larvae that hatch from Flood Incubators. These quick critters jump in the air and latch onto prospective hosts like the parasites they are. They are responsible for spreading the Flood infection to Covenant and humans alike. Alone, a Flood Spore is a mere nuisance. But, in large numbers, they can bring your health down surprisingly fast.

The Spore are larvae that hatch from Flood Incubators.

The Spores die easily with one round of ammo from an Assault Rifle. Once hit, they pop and make a small explosion that can cause nearby Flood Spores to pop in a chain reaction. In a small group of four or five, just let them hit you if your shield is charged up. If there’s a swarm, fire a round or two in the middle of them to cause a chain reaction explosion to eliminate nearby Spores. You can always backpedal and melee attack them if you want to conserve ammo. Shotgun blasts can thin a swarm of Spores quickly and easily, but you should only resort to this method when attacked by large groups, as this ammo is generally harder to come by.

This weaponless Flood creature was once a Grunt. Now, it’s a slow-moving egg sac for Flood Spores incubating inside. They wander aimlessly until they sense you’re nearing proximity. Wander too closely, and they will explode with the force of a grenade, spewing forth a host of Flood Spores. Flood Spore Incubators will also trigger uncollected grenades to explode when they pop, so keep your distance. 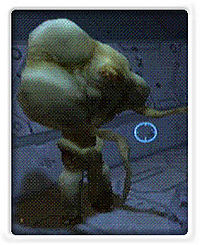 Use a Shotgun blast from a safe distance to pop those critters. An effective crowd-control tactic is to hit them with fire when surrounded by other enemies. One smack with a shotgun blast, and their bodies will fly through the air. Like its Flood Elite counterpart, the Flood Human will rebound from an assault rifle attack. The best way to dispose of flood enemies is with a shotgun. One close-up blast puts most Flood down for good. If you don’t have a Shotgun handy, use any weapon at your disposal and fire until they croak. Melee attacks work wonders on a fallen Flood Human, so get in a few cheap shots when the opportunity presents itself.

Formerly a Covenant Elite, an infected Flood Elite mainly uses Covenant weaponry, though in reality, it will use anything it picks up. Keep your distance from its powerful melee attacks. A Flood Elite will often get back up after beeing knocked down by a Pistol or Assault Rifle. 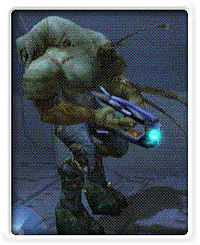 Keep your distance from its powerful melee attacks.

The most effective weapon against the Flood Elite is the Shotgun. Melee attacks alone are useless and suicidal. Grenades work well, but be warned: Plasma Grenades can get shipped “Return to Sender” on the backs of the Flood Elites. Keep your distance, or else your package might blow up in your face.

The Sentinels hover in packs of six and eliminate anything they perceive as a threat, using their sole onboard weapon: an accurate laser beam. 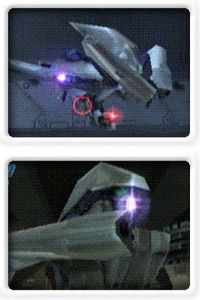 Sentinels act as the Monitor’s guards.

Some Sentinels have energy shields protecting them. It’s folly to confront a group of these machines head-on. Rather, hide behind cover, taking pot shots from a safe distance. Whittle their health down until they go down in a shower of sparks and debris.