The images shown on this page are actual in-game screenshots and are not pre-rendered. Please click on any of the images below to view it at a larger size. 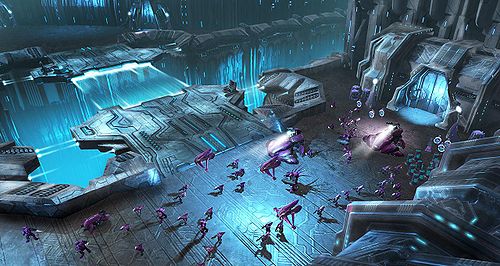 Before any game goes into full production on the art front, artists have to flesh out the look of the environments, people, and vehicles. These pieces of art can be of great inspiration when creating a game, allowing artists to easily try out ideas for great big environments or intricate units quickly and easily, without the restrictions of a game engine. Here is a collection of some of the early concepts that our teams has been working on for Halo Wars, we hope you enjoy them.

Please note that because concepting happens early in the development cycle, they often depict ideas, scenes, or units that may not appear in the game.

As we develop the game we hope to share a number of renders here on our website. The latest images to be added for from the Five Long Years cinematic that we released at E3 2008. We have also added a render of the UNSC Spirit of Fire model that will be used in various cinematics for the game. The Spirit of Fire and her crew are featured prominently in the campaign for Halo Wars.

If you'd like to set one of the images below as your desktop wallpaper, simply click on the image that you'd like to use below and then right-click on it and select "Set as Background".