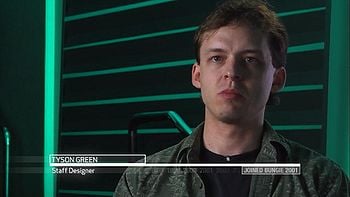 Tyson Green, aka Ferrex, is a senior designer at Bungie. He is believed to be the inspiration for the Mendoza/Kappus character model from Halo: CE and also has his own easter egg in the game. Green moved on from Campaign level design after Halo 2[1] to become the Multiplayer Design Lead for Halo 3.[2]

Quote from the Halo 2: Collectors Edition DVD: "Yesterday before the demo, we had all this stuff that we were just throwing in, and finally something began to catch and we started moving. But all this stuff that didn't exist two hours earlier, is all of a sudden in the demo ready to show to people. That's when it's the most rewarding, the most fun, to be doing this sort of stuff is when it clicks."

Joseph Staten: "Of all the people on the team, Tyson Green and I are probably the people who are most frightening for Jason Jones and the programmers. We are the most crazy-scripting, crack-smoking, 'This'd be so cool. Damn the frame rate! Let's pound the code and make these crazy things happen!'"