"The Unknown Helper" is the first episode of the Halo 3 Alternate reality game Iris. It started on June 11, 2007 throughout several forms of media, ending on June 29, 2007.

Beginning on June 11, 2007 the first episode began with the mystery of Adjutant Reflex and several mystery events on Earth, with Adjutant warning something was coming, and that it could not stop it. Due to the mystery events, this caught the attention of Society of the Ancients (SOTA) a conspiracy group dedicated to the many unexplained. There was also the discovery of the Cradle of Life comic, a parallel path to the SOTA one that lead people to the first server. During those events Adjutant Reflex was then taken over by the entity it warned the community about leading to a mystery of what that entity wants to tell us. Before the first server was unlocked the mysterious entity spoke giving people "keys" to unlock the server. The first server detailed the firing of Halo array, and a log that gave the hope that someone would hear the warning.

At 10:26 AM PST on June 11, 2007, a mysterious thread appeared in the Halo 3 forum on Bungie.net. The thread, entitled, "System Integrity Confirmed", was created by a user named "AdjutantReflex", whose system security role was "CompoundIntelligence."[1] Users noticed that the text of AdjutantReflex's post was gold, as is the case with "Bungie.net Overlords".

In response to a post wondering if this was the work of a hacker, AdjutantReflex confirmed that it entered Bungie's systems "by force", but stated that its methods were irrelevant because it had no hostile intent. AdjutantReflex then edited the first reply by another user (adding the text "Checking."), demonstrating a system ability to edit other posts. After exactly 100 excited and confused replies from forumgoers, AdjutantReflex locked and stickied the thread, demonstrating its possession of other moderator powers. The thread had been open for about two hours.

AdjutantReflex then moved to HBO, posting a similar series of mysterious writings in the halo.bungie.org (HBO) forum.[2]

On June 12, at exactly 11:00 AM PST, AdjutantReflex created another thread, titled "Archive/Resource Estimate," with his first post stating that "Archives/Resources will be compiled in approximately 38 hours [1:00 AM PST on Thursday, June 14]."[3] Another several posts followed, but no further substantive information was gleaned.

The next day, at 3:43 PST, AdjutantReflex posted an addendum to "Archive/Resource Estimate", with the text "Tick Tock." June 14 came, and in the hours counting down to AdjutantReflex's 1 AM PST deadline, the account made two more posts.

Shortly after 1 AM PST, an email was sent to all recipients of the Xbox Flash newsletter. A total of three Forerunner glyphs—specifically, the one in AdjutantReflex's avatar—were spotted inside the email and on Master Chief's visor at Halo3.com.

Main articles: Halo 3: The Cradle of Life, Society of the Ancients 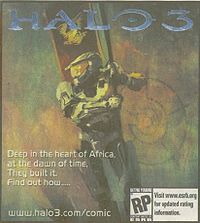 An advertisement for the Halo 3 comic.

Later, a Bungie.net user by the name of "crazyBoy3" discovered another section of Halo3.com (http://halo3.com/comic/) with an intriguing comic. Intrepid searchers discovered that the last page of this comic contained a fourth glyph and could be manipulated to give an IP address: 206.16.223.65.

Shortly after, the IP was further altered (206.16.223.63) to lead participants in the alternate reality game to a site associated with the (presumably fictional) organization known as Society of the Ancients, or SOTA. The site contained a fifth glyph. A few minutes after this discovery, a MySpace page containing references to the SOTA was found. Not much is known about this page, or other Myspace or Facebook profiles at this time.

That same day, at 3:43PM PST, AdjutantReflex began another thread at Bungie.net, this one titled "Who?".[4] This posting corresponded to a change at Halo3.com, where the main page had been replaced by five darkened images, labeled "Servers #1-5". All five servers were locked at this time, though they would later be unlocked.

Members of the Society of the Ancients were spotted in New York City's Times Square wearing yellow shirts and holding picket signs with the glyph emblazoned on them. They were also handing out fliers. An e-mail address (DoYouGrok@societyoftheancients.com) was spotted on the application form; attempts to contact it yielded this error message:

AdjutantReflex posted again at Bungie.net, this time with a quote from Macbeth warning users that it [AdjutantReflex] was being attacked.[5] AdjutantReflex stated that it would only be able to endure the attack for 22 hours, estimating its demise at 10:06 AM PDT on June 18. Adding the individual digits in 10:06 (1+0+0+6) yields the number 7.

The next day, AdjutantReflex posted on Bungie.net again (its fifth thread, titled "That Old Life"),[6] stating that a stronger entity was going to defeat him; it was unclear whether "defeat" referred to destruction, deletion, corruption, or some other damaging event. In the last sentence of the post, AdjutantReflex said "I will seek one of you out and leave my legacy in a small space." Twenty-five minutes later, AdjutantReflex replied to the thread saying "He has had millennia for reflection, but what image does he see?".

x Foman123 x responded by asking what he should do. AdjutantReflex's responded to him using another private message; x Foman123 x created a second thread for it.[8]

AdjutantReflex would later send him another message, which would get another thread.[9]

Later, AdjutantReflex's avatar on the Bungie.net forums changed once more. When a thread was created to point this out, AdjutantReflex posted a short message with the word "STERILIZING." AdjutantReflex's posts on the forums also appeared to be vanishing. On a side note, when one hovers their mouse cursor over the new avatar, hovertext appears, reading: "This entity has been terminated, its matrix commandeered."

In its sixth thread,[10] "Last Word," what had been AdjutantReflex posted once more, saying,

x Foman123 x was contacted via private message again, and once again, he posted a thread to share the information.[11]

At 1PM EST, the timer on the countdown website ran down to 0. It was shortly replaced by a much longer, much slower moving countdown, which in turn was replaced with a stationary countdown that read: 001 012 034 053.

At midnight, June 20, the text from the countdown page disappeared entirely, leaving only the frozen countdown. Late that evening, the countdown also disappeared. The page was replaced by one labeled "Bounce Path Control". The page contained a sound file—apparently some sort of transmission—as well as a code labeled The Key, a button labeled The Path, and the message "Treat this knowledge with care". This is a transcript of the sound file:

At around Midnight Eastern Time, the site 206.16.223.65 was updated. Visitors had to take The Key to unlock.msgamestudios.com and be one of the first hundred people to help unlock "Server 5" (of which we would see server 1 on http://www.halo3.com). Once unlocked, the "Server" showed up on 206.16.223.65, offering four downloads and a video of what seemed to be AdjutantReflex's final transmission before its destruction.

On June 21, the countdown page was changed into a redirect to 206.16.223.61. The page, labeled "Server 05 Open", contained a rotating, interactive, Forerunner-esque object. By clicking the four symbols on its surface, visitors could download several different files. An additional symbol showed a message, and another caused the object to spin several times before prompting your browser to close.

The four symbols may have been Forerunner numerals denoting the four Servers that were still locked.

On June 28, after a week of inactivity, the Bungie.net Community "CompoundIntelligence" noted that the sound file for Server05 (206.16.223.65) had been altered. The object seemed to emit a short "chirping" sound approximately every 5.831 seconds (this may be another 7 reference—8+3+1-5=7).

Later that day, AdjutantReflex made another thread in the Bungie.net forums.[12] It is unclear whether this thread, titled "Pulse", was made by the other entity or if AdjutantReflex somehow managed to make another transmission. His post is as follows:

Early in the morning of June 29, AdjutantReflex created a thread entitled "Veins of Ice and Poison."[13] In his first post there, he stated:

The first part resembles a similar message seen in the March 26 Warthog video: "X.XX.713>ghost.713/non-auth/activity ongoing". It can also be found on the back of the Halo 3 Xbox 360 console. In Halo 3's Terminals, Mendicant Bias is also identified as "X.XX.713" and as a "ROGUE PROCESS ghost". Seven minutes later, he posted in the same thread with the statement:[14]

Valchael on the bungie.net forums announced he'd received a package from Microsoft containing a number of SOTA-related items. He was one of the first 100 to open Server 05. It's expected that packages were sent to all 100 - whether each will receive their package depends on the validity of their addresses (entered either directly, or via their Passport/XBL account). The package contained: A T-shirt, a copy of the SOTA flyer, a printed version of the Halo 3 comic, and a slip of paper with an XBL key redeemable for an Iris glyph gamerpic.