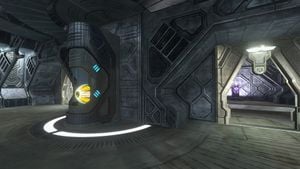 The terminal in a semi-circular room, with corridor in the background.

After fighting the Hunters, continue on your way until you enter a building in the cliff wall. You should now be in a corridor with two holographic displays on the right, and two doors on the left. Enter the semi-circular room and you will see the first of the seven Terminals.

However, it was immediately apparent that enemy group sought only to enter [D<-3-1123 b's] atmosphere and make landfall. In this they were partially successful.

(No message from Mendicant Bias upon shutdown)

(Upon being rerouted to new destination within Terminal)

L: Categorization has sped since the improvements were announced, but there are many hurdles. The indexing of sentient species may have irreversible effects on the surviving insentient species. We will have extinction events and irreparable environmental harm on at least 18 worlds. Current projections estimate post-archival cataclysm on as many as 31 worlds. The paucity of sentience has been a blessing in this regard.

I know things beyond the [Maginot] line are harried. But I worry about you. I've asked you time and time again. Abandon your cataloging. Come back inside, where my fleets can keep you safe.

L: Would that it were my choice. I have committed to this course because it's the right thing to do. We no longer have the manpower or materiel to excise remedial measures at a planetary level. I certainly can't justify using the [transit measure] to save my own skin when there are still so many innocents to protect and index.

D: You know I oppose your mission, but you're exceeding its parameters anyway. You've put yourself in jeopardy. You've done enough.

If you will not come to me, I will find my way to you.

L: We have no time to spare, Didact. Every vessel we can fill, we send to the Ark. I dare not cease the mission. Not now, not until I've done all I can. Each one of these souls is finite and precious.

Close to saving them all.

(Upon being rerouted to new destination within Terminal)

[29,478 hours] have passed since I left the [Maginot] sphere and entered contested space.

The enemy is everywhere.

Despite this the morale of my charges remains high. They wake, clean themselves, fuel their bodies, communicate with one another, eliminate waste, train to destroy the enemy, and return to sleep. The sacrifices they have chosen to make on behalf of their [brethren] fills me with pride.

If only I could save them all - but they know, perhaps even better than I, that that is not possible.

The importance of my mission forbade me from rendering any aid, but no less important was the need for me to study the enemy's capabilities in real world situations.

[2 hours] ago 12,423 small recreational vessels appeared inside [CE-10-2165-d's] orbital perimeter. Hidden within that vast swarm were seven massive freight carries. The smaller craft were employed as [ablative armor], allowing the carries to descend through the atmosphere; landing on top of major population centers.

Despite the fact that the naval garrison was aware of the likelihood of just such an attack, their ability to effectively defend against it proved insufficient.

This has always been the enemy's [modus operandi]: [flood] your opponent's ability to process information with so much noise that no meaningful resistance can be put into action.

[3 minutes] ago those same population centers began disappearing under brilliant flashes. This was not an ill conceived, poorly implemented counter attack; it was a deliberate denial of resources - those resources being the remainder of [CE-10-2165-d's] population.

Is this the noble sacrifice my creators spoke of? Where is the nobility in these streets paved with greasy carbon and dun ash? [My mouth is speaking at another's behest] - that is not my voice; that is the other.

Its voice stands out as the single calm note in the panicked cacophony outside the sphere. It alone is not decrying its fate or raging against the [central government].