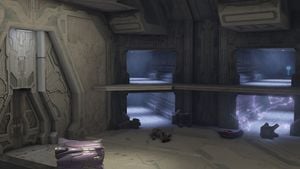 The terminal is a Forerunner terminal in the back of one of the jail cells on the upper level.

Campaign level: The Great Journey
The terminal is a Forerunner terminal in back of one of the jail cells of the Bastion of the Brutes. It is in the center right cell on the upper level.

Open up on 343 Guilty Spark and Sesa 'Refumee, who is carrying a purple box.

He puts down the box and opens it, releasing a pair of holo-drones from inside.

Cut to the Fleet of Particular Justice surrounding Alpha Halo.

Cut to Thel 'Vadamee on the bridge of his flagship speaking to a Hierarch via hologram.

Back outside, the Pillar of Autumn emerges from slipspace.

Cut to a side-view of Guilty Spark.

Cut to the shattered remains of Alpha Halo. 'Vadamee's flagship is leaving the system.

Cut to 'Vadamee inside the Phantom as it lands.

Overhead shot of the Phantom docking at High Charity.

Cut to 'Refumee looking at a holographic image of 'Vadamee.

Fade to 343 Guilty Spark and 'Refumee staring out a window of the Gas Mine. Camera slowly pulls back.

Scene rapidly pulls back from the window, revealing the entire Gas Mine.

Camera zooms further away from the Gas Mine and pans up.

Scene clears the clouds and rests on a shot of the shattered, burning remains of Alpha Halo orbiting Threshold.