I can fill in the blank here for the transcripts for the Intel from the mission Unconfirmed, such as in the quote Governor, just got a message from []. Losing his mind. The name he's saying is Thivyanathan. The character's full name is Andrew Thivyanathan. That's me. In December 2013, another gentleman and I each won a visit to 343i's studio from an event for http://www.childsplaycharity.org/. The visit actually happened in October 2014. We got to see some stuff around the studio and play in their playtest lab. We also were able to work with a concept artist to design some Spartan armor that would be used in the game. I came prepared with a few ideas, and the one that was used thouhh was my suggestion that it would be interesting if the UNSC discovered some ancient human tech and built something off of that. So that's where the HELLCAT armor came from, at least partially. We were also to be made minor characters somewhere in the Halo universe. I was pretty surprised to hear my name in the audio log though. Halo writers met with both of us and explained a little bit of the background of our characters. Unfortunately, I don't remember all of the details because it was just a verbal meeting, but basically, Andrew Thivyanathan (the character) is a de-glasser. I don't remember for sure, but I think the other gentleman who visited 343i is named Matt Riley, so I think that's his character speaking in the audio log and named in the description of the Intel. Unfortunately, I also don't remember the details of the armor he designed. I'll try to find that out as well as confirm his name. Also, they gave us concept artist rendering of our characters. I'll try to upload a picture later. BTW, I have had another account on Halopedia for a long time, I just prefer to keep it separate. AndrewThivyanathan (talk) 17:14, 4 November 2015 (EST)

No way! Hellcat is one of my favorite armors, thanks :D -- Topal the Pilot 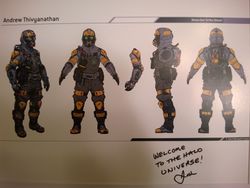 So was this for the Hunt the Signal thing? -- Topal the Pilot

I can confirm that the other guy was Matt Riley, as I met him again at the Child's Play Dinner again this year and spoke with him. Unfortunately, I have no independent source for this yet. Also, the armor he helped design was based off of the idea that out on the frontier, people might make/modify armor by combining various parts available to them. I don't know which armor in the game specifically is his yet. After the holidays, I'll send an email to 343 and see if they'll confirm these details.AndrewThivyanathan (talk)04:23, 21 December 2015 (EST)