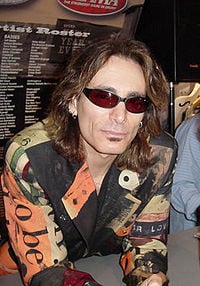 Steven Siro Vai (born June 6, 1960 in Carle Place, New York) is an American guitarist, composer, and record producer, notable for having received a Grammy Award (along with nine nominations) and being cited as an influence by many guitarists ever since the 1980s. When growing up, the young Vai became interested in rock giants such as Jimi Hendrix, Alice Cooper and Led Zeppelin, which led him to take up learning the guitar. Prior to attending Berklee College of Music, Steve frequently jammed with his teacher Joe Satriani and played in numerous local bands. He has acknowledged the influence of many guitarists, including Jeff Beck and fusion guitarist Allan Holdsworth.

He worked with Martin O'Donnell and Michael Salvatori for production of sound in Halo 2. He also worked on many of the tracks in the Halo 2: Original Soundtrack as a guitarist, on Volume 1 and Volume 2 (where he was featured in the track Reclaimer). He rerecorded his Halo 2 guitar tracks at Skywalker Sound for Halo 2: Anniversary.[1]