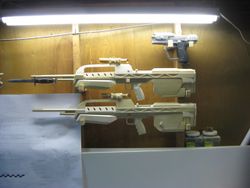 Halo fan and master wood worker LeeKegan has unveiled his faithfully recreated, hand carved Poplar and White Pine BR-55 battle rifle, that will feature a working clip, bolt, scope, ammo counter, sound effects, and flashing lights for the muzzle blast. Once Lee was finished with the carving, he teamed up with his friend Rube to create the molds for the casting. It took Rube a couple tries and techniques to get a few of the pieces ready, but after working diligently and tediously, he was able to bring the Battle Rifle to the community. The finished BR is crafted out of Smooth-Cast® 320 Series Liquid Plastic, a special casting resin.

Rube graciously describes a bit of the casting process:

"The mother mold is Plasti Paste". Says Rube. "I love it and I hate it. It cures fast and is easier than fiberglass in general but it is hard to smooth out and maintain a constant thickness. The little fiberglass bits want to stick to each other and pull more material with them than you want as you trowel it around. Takes practice I guess."

"Plasti Paste comes as two parts. You get a bucket of chopped fiberglass mixed with one part of the usual two part urethane system and a couple of quarts of brown liquid other part. You have to mix the two parts very thoroughly and that takes a few minutes since the fiberglass part wants to form little clumps that resist mixing with the liquid. Smooth-On says it is best to pour it out immediately and spread it out roughly rather than try to apply it bit by bit from the container. I forgot that part until the hand holding the container started to get hot."

"After the mold cured I noticed that the upper part an application was less dense than the lower. It seems that the urethane has a tendency to drain away from the fiberglass and migrate down. I probably just needed to put it on in thinner layers."

"I am also not fond of the little hairs that inevitably stick out of the main mass after it cures. I sanded most of them off and brushed on a coat of smoothcast so I could handle it without gloves. Scritch, scritch, scitch..."

The final BR-55 will be sanded smooth, and hand painted. Although none of the copies will be for sale, you can view many more photos of the finished and unfinished rifle, as well as some of the casting process here.