While the first issue of Halo: Helljumper was released only a few weeks ago, CommanderTony just received his copy, and will now give you his verdict on the new comic series from Marvel. 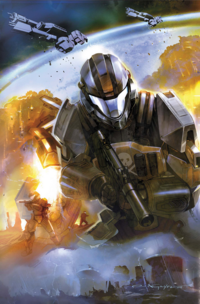 It's been a while since i've done a review for anything, and the first time i've ever done a review of a Halo product. A couple weeks ago, when Helljumper launched, I thought i'd make Halopedia News' first review about the first issue of this brand new comic series. And a short time ago, I received it.

So bear witness to one of the newest members of the critics ranks, and one lame attempt at a good in-depth review. Enjoy!

Helljumper #1 starts out on a UNSC starship above the Human colony of Ariel, an archaeological colony consisting of a few bases, with no military presence at all. You get the feeling that the comic will be somewhat like Halo: Uprising, the prequel to Halo 3. I base this on the fact that it sets up two distinct plotlines for two different character types, on one side, you have have a squad of battled hardened Orbital Drop Shock Troopers (which include Dutch and Romeo), and a story about a blond woman, likely an archaeologist, trying to evade capture and death by the Covenant Empire.

Despite all of that, this story is strictly focused on our favorite command of the UNSC Marine Corps. In the opening scene, you can see LCpl Kojo "Romeo" Agu acting like he does in the game Halo 3: ODST, an undisciplined and smartass Marine. Him and a Marine named "Brimley" engage in a heated argument about John-117 and his fight against the Marines about the Atlas in 2525, which leads to one of the best bar fights (and the first) in Halo history. Romeo, an obvious drunk, is quickly subdued by this Marine by throwing him to the ground before he knew what hit him. What this new Marine didn't know that Romeo's best friend, Cpl Taylor "Dutch" Miles, was attempting to break up the fight. This shows off the monstrosity that is Dutch, who looks more like a Jiralhanae than any Human ever seen, hell...he could be an ex-SPARTAN-II for all we know XD.

After this bar fight on the ship, the story takes a down turn, the Marines land on Ariel and proceed to assault one of the facilities on the colony, and the connection between the blond woman and Dutch is revealed. All in all, the only exciting part of the story was the fight, which played a dual role of portraying the UNSC Marine Corps as a worthy successor to the US Marine Corps, and setting up Dutch & Romeo as the central characters in this series.

STORY: 3 out of 5 - It was neat, though it could be far better. Hopefully this issue was just to set up everything in order for the next four to prosper.

This has to be the best thing of the whole comic. Eric Nguyen did a fantastic job in portraying the Orbital Drop Shock Troops in the way they were meant to be, instead of some scrawny high school JROTC Cadet like the Marines in the games are, these boys are gigantic hulks of death, and they know it. The action sequences, especially the bar fight, are what you expect of out a comic, unlike what we saw in the Halo Graphic Novel, with only a few "BLAM", "BOOM", and "POP!" moments that show up when an important event happens.

Absolutely nothing to complain about in the visual department, it's a beautiful spectacle throughout, the lines are crisp, the colors are vivid, and the details are immense. Couldn't ask for anything better.

While the art was fantastic, and the best thing about Helljumper, the lack of story really brings down this issue. It takes place in more places than it needs to be, and shouldn't jump around the timeline, at least without timestamps.

Though I do believe Marvel when they said that Helljumper and Spartan Black would not be like Uprising with the constant delays in release, they do need to fix the problem with this series trying too much to be a a worthy prequel to the ODST game. With only a small fraction of the squad currently focused on in the comic so far, they need to branch out and form their own story, not one where we immediately learn how they meet up before the Battle of Mombasa.

EXECUTION: 2 out of 5 - More dedication needs to be put into the plot, and way less on action.

Story jumps around more than Doctor Who

Extremely short, seems like it just started when you flip to the last page.

Fvcking ads in the middle of the comic, like I care about the fuel efficiency of some Honda piece of sh!t.

An average of all previous scores.