After a recent bnet update, the ever beloved Battle Rifle has been reported to not make an appearance in Halo 3: ODST. 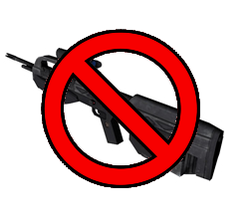 In the June 5th Bungie Weekly update, it was confirmed by Urk that the Battle Rifle will not be making an appearance in Halo 3: ODST, in any way, shape or form. This is, however, exclusive to the main disc (which anyone who's been paying attention has already duly noted contains only the ODST campaign and Firefight), and won't tamper with the Halo 3 multiplayer of the 2nd disc. Urk had this to say:

"Halo 3: ODST’s campaign and Firefight modes don’t feature the Battle Rifle. I’d tell you to blame Luke, but don’t worry, once you get your hands on the automag, you’ll forget all about your precious BR. And of course the traditional Halo 3 multiplayer, which you’ll remember from earlier in our conversation, is found on the second disc packed in with Halo 3: ODST, doesn’t make a single feature change to Halo 3’s multiplayer. If you want to four-shot some scrubs, you’re only ever a disc swap away."
— urk

Upon examination of his quote, you'll notice that Bungie's decision to remove the Battle Rifle mainly laid with the inclusion of the Automag, a re-imagination of the Halo 2 Magnum, with a Halo: Combat Evolved-styled scope. This, coupled with the fact that the M7S SMG also has a scope, would mean far too many weapons meant to hit from afar, leaving closer-ranged weapons in the dark.

Also worth mentioning is the return of the Brute Plasma Rifle, as seen in various screenshots and the Bungie Project page for Halo 3: ODST. While not exactly a fan-favourite, it should be interesting to see how the Halo 3: ODST era Brutes manage to manipulate it.