All sorts of changes are under way inside the dark and mysterious Kirkland bunker where Bungie, the renowned game studio, is putting final touches on the next version of Halo. 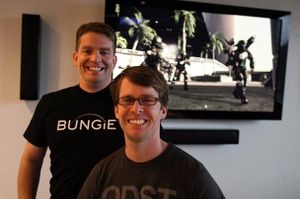 "The structure of the game is also different, for "Halo." Instead of trudging along a fairly set path, "ODST" begins in a dark and mostly empty city that players can freely explore, an "open world" model popularized by the "Grand Theft Auto" games. Players who prefer traditional "Halo" can head directly to sites in the city that trigger "flashbacks," putting them into classic "Halo"-style missions fighting aliens and blowing things up. Clues to the mystery come from playing through these missions."
— Brier Dudley, Seattle Times

In an interview with The Seattle Times, Bungie states that development of Halo 3: ODST is undergoing final touches and is nearing completion. A Nielsen survey released states that ODST is currently the most highly anticipated game of the year, like all of it's predecessors, with 53 percent of gamers expected to purchase the game later this summer. Also, the first name of a Marine ONI spook in the game, commonly referred to as "Dare", has been confirmed as "Veronica"; which has been rumored ever since the IGN.com interview that featured the full ODST opening cinematic.

What seems like Bungie tradition, only four years after moving to their independent facilities in Kirkland, Harold Ryan and others are already planning to shift offices to downtown Bellevue. Where they will occupy the former Galleria multiplex theater, where their environment will be in a vast open area with 30-foot-high ceilings. This is likely due to the gigantic Mark 7 Anti-Everyone Slingshot.

Bungie President Harold Ryan also stated that Reach, their newest project recently announced at E3 2009 in Los Angeles, may include gameplay elements enhanced by Project Natal. If you don't already know, Natal (also announced at E3 2009) is a motion-sensor accessory for the Xbox 360 designed to throw away the boundaries set by the standard controller.

To read more about ODST, Bungie's new studios, or Reach, check out the full article here.

Please keep your comments civil, short (with at least five words), to the point, and good. Thank you!