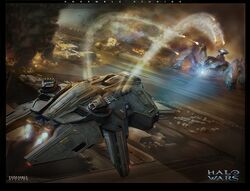 Robot Entertainment has announced the 3rd Halo Wars Title Update on the Halo Wars Official Site. This patch is set to be released on Xbox Live in a few weeks. Here's a list of the changes the patch brings to Halo Wars' gameplay:

So this is it folks, this patch will make Halo Wars more interesting and challenging to play. Will more Title Updates come out? Sure as hell they will!