Can anyone think of a better name for this class? I find it sufficiently descriptive, but I also think we could possibly come up with a better name. --WTRiker (talk) 12:44, 8 January 2013 (EST)

Only one that is canonically acceptable. Can't just "make one up". Unfortunately, not much information is available regarding these types of ships or their individual names. --Xamikaze330 (talk|contribs) 17:34, 8 January 2013 (EST)Xamikaze330

What I more meant was something like "Unidentified UNSC capital ship (armored)" or whatever, not pulling a random class name out of a hat. --WTRiker (talk) 13:21, 9 January 2013 (EST)

The ship pictured here is actually the Poseidon-class. The Vindication-class is the one with the pointy spines sticking out the front. -ScaleMaster117 (talk) 22:50, 14 May 2014 (EDT)

Huh, I guess that makes the ship length seem realistic if this one is in fact the cruiser. Rather than rename the pages, I suggest that it would be easier if we just swapped information between pages. - NightHammer (talk) 22:55, 14 May 2014 (EDT)

Actually, now that I think about it, it would be easier to rename the pages so we do not have to go to each article and change the link. Any suggestions? - NightHammer (talk) 23:16, 14 May 2014 (EDT)

Interesting... concept art for the one with the spikes labels it as a "UNSC carrier" (well, the unofficial online gallery page does, anyways). I did just switch the pages around, so I hope you're sure about this. --Jugus (Talk | Contribs) 01:04, 15 May 2014 (EDT)

Alright, sorry about that. I did think that the flat top one was the carrier due to the fact that the infinity commissioning ceremony takes place on the flat top one. Kind of like a flying air craft carrier. Made sense, thanks to scale master for correction.Erickyboo (talk) 01:23, 15 May 2014 (EDT)

It is right now! We originally misidentified the two classes, and it was corrected when ScaleMaster117 informed us of the error above. - NightHammer (talk) 19:17, 29 May 2014 (EDT) 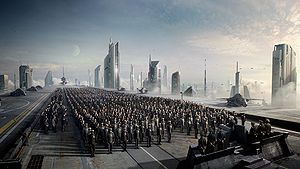 We sure about this? There are fighters on the deck of the vessel that look exactly how they do aboard modern aircraft carriers.Councilor 'Rumilee (talk) 20:05, 30 May 2014 (EDT)

ScaleMaster117 was already aware of what class vessel this was. As a side note, when I performed the trick on the level Midnight and flew around & through both this and the 'Poseidon' class vessel, the 'Vindication' class was much longer & larger which coincides w/ the lengths provided in the Halo Bulletin. I do understand that the Vindication class does appear more like a carrier but it is what it is.--Killamin7 [Comm|Files] 10:18, 31 May 2014 (EDT)

Can we not get a better picture for this ship class as the main picture. The current one is not at all clear and shows parts of three ships. An edited version of the Commissioning picture (as seen in the gallery) which cuts out the Infinity and just shows the Vindication in the background would serve this better as it is the clearest image of the class seen currently. VARGR (talk) 16:24, 29 May 2014 (EDT)

I'm not so sure about using that image because it may be too small once cropped and doesn't show the ship in it's default form (w/o the atmospheric boosters). I could try using the trick again but this time using the blind skull so I can get a better, clear cut view of the vessel.--Killamin7 [Comm|Files] 10:07, 31 May 2014 (EDT)

So, I haven't done this in a while and I apologize if this is a silly question: we can safely assume that the Vindication-class has a Magnetic Accelerator Cannon. Would it be fair to also assume that it has two? Considering that most ships close to this weight or above (barring the Halcyon and Autumn classes) have at least two. It is a battleship, after all, and the destroyer a third of the size carries two MAC's if I recall correctly. --O.B. Carson (talk) 11:36, 28 October 2017 (MST)

We shouldn't include assumptions unless it's based somewhat on hard evidence. It likely does have at least two MACs, possibly four based on those vanes at the fore, but those vanes could easily be sensors/probe launchers like the Autumn. It could also simply have a heavier MAC than smaller classes. Hell, it could be entirely missile-based like the Anlace-class frigates, hammering enemy ships with massive broadsides of post-war shipkillers. Until we get something that suggests its armament, I'd rather leave it blank. -- Qura 'Morhek The Autocrat of Morheka 04:25, 3 November 2017 (EDT)