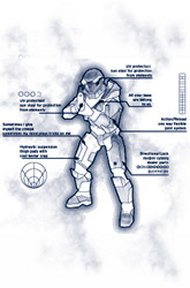 Performance-enhancing equipment has been the standard for the human soldier for hundreds of years; no soldier alive would refuse gear that extends his voice, sight, and physical capabilities. In the modern military, night-vision scopes, laser targeting systems and other devices that improve the fighting man's ability to destroy the enemy are the norm.

In Halo®, the player—taking the role of the last surviving SPARTAN, an elite unit of supercommandos—wears a powerful suit of powered-armor: the MJOLNIR, Mark V.

MJOLNIR armor is constructed in overlapping layers. It is a sealed system, capable of extravehicular activity or operations in toxic atmosphere. It is hardened against EMP and radiation, and has environment filters that are completely effective at removing toxins and bacteria from local atmosphere.

The armor's shell is a multilayer alloy of remarkable strength and has been augmented with a refractive coating capable of dispersing a limited number of Covenant energy weapon attacks.

The battlesuit contains a gel-filled layer that regulates temperature and can reactively change in density. The inner skinsuit is a moisture-absorbing synthetic linked to an environment control computer and the "pilot's" UNSC-issue neural interface.

Each SPARTAN has a molecular fiber network within his brain, an upgrade to the standard "Command Neural Interface" (issued to all UNSC troops). This network translates electrochemical signals to digital code and routes them through an interface connection at the rear of the skull. His thoughts could now command the armor's movement and weapons, and input from the onboard sensors could come directly to his mind. The synthesis of machine and mind is so fast that it is almost impossible to chart—reaction time is more than five times faster than of an unaugmented human.

Sandwiched between the external armor and the internal padding is the most devastating weapon the suit carries: a layer of crystal. Woven by molecular tools into a superdense optical computer memory, this crystalline layer forms a network capable of supporting the kinds of artificial intelligence usually reserved for starships—a "piggyback" system. An A.I.'s personality and processing matrices can be carried by the armor and delivered to the onboard storage in a crystal data chip no larger than a personal currency chit.

With such a powerful computer in a mobile package, the SPARTAN-II / MJOLNIR combination is designed to be the most devastating intelligence tool ever created.