< Archive:Bungie.net‎ | News
This a word-by-word replica of the original page at Bungie.net. All typos and discrepancies are included as originally written.

Shiek reveals how he helped bring the Engineer to life.

First seen in still images prior to the retail launch of Halo: Combat Evolved (and then again by industrious players who coaxed character models out of unplayable portions of the disc), our official unveiling of the Engineer didn’t go down until eight years after the Master Chief first went toe-to-toe with the Covenant. But since you’ve now seen these curious, armor-clad characters floating and sputtering around the city of New Mombasa, we figure the time is right to declassify their artistic origins.

To help us do the dirty work (you’ll see what I mean in just a bit), we commissioned resident Tom Foolery expert, Bungie artist extraordinaire, and one of the men principally responsible for the visual look of the Engineer, Shi Kai Wang. He talked with us about where the idea for the Engineer originally came from, what inspirations influenced its final design, and the alterations the character underwent from its original inception until its public introduction.

Oh, and we’ve got some pretty pictures too. 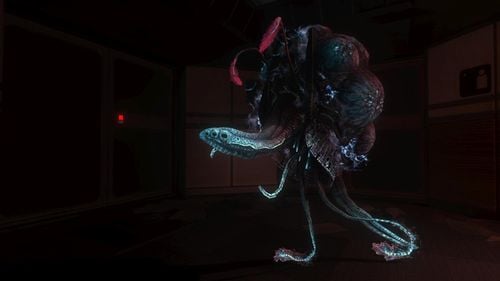 Q. It’s no secret that you’d been working on the Engineer for quite some time before it finally made it into Halo 3: ODST. What was the original concept and inspiration for these creatures and when did it come about?

A. We started the Engineer all the way back in Chicago, around 1999 or so. The original idea for the Engineer hasn’t ever really changed, they were meant to be a class of aliens that acted as idiot savants towards technology. We wanted a set of creatures that could decipher the Forerunner tech easily, and allow a glimpse into what made the Forerunner technology so special. As far as gameplay, the designers wanted a race that were less aggressive to populate the world in a more passive way, making Halo feel more alive. 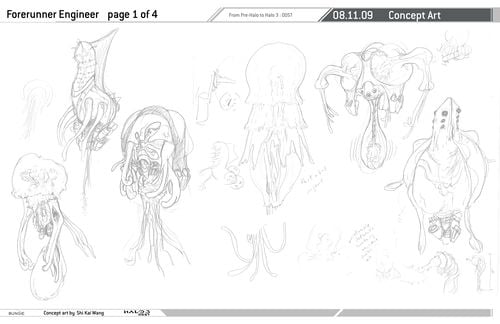 Q. Interesting. So how does that process ultimately unfold? Do the writers and designers stop by with their ideas and ask you to build out something that fits, or were you simply thinking about what kind of characters could exist in the universe and just jumping off from there?

A. Usually designers have an idea of what they think a character should do, what its role is in the world, and sometimes a very general idea of what it should look and feel like. With the Engineer it was simply a character meant to be passive, almost puppy like in nature. That way, players feel bad when you make their bodies explode into a million pieces covered in pink and blue goo. It’s the artists’ job to explore multiple ideas and directions to see what fits within the gameplay and art style.

Q. Looking at the multiple takes, it seems the Engineer’s anatomy might have been inspired by some of our own undersea creatures – cerebral sort of stuff like jellyfish, cephalopods, and eels. Were these some of sources you looked at, or am I just adding my own personal interpretations?

A. I definitely looked at a lot of sea creatures for inspiration - the way they move, the way they emit light, the fluidity of their bodies - and tried to translate that into a creature out of water. Under water sea slugs and glowing jellyfish were the main source of inspiration. 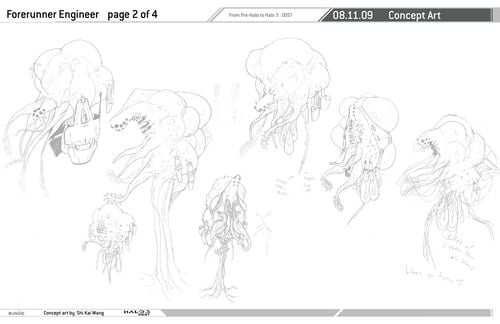 Q. Why did you feel that those made such a good fit for the Engineer?

A. I think underwater sea creatures like the jellyfish had the right type of feel to them, a very docile and graceful creature that just minds its own business—very much how we initially wanted the Engineers to be. But we did add more emotive states to their animations and facial features to make them relatable, so that people would feel for them. 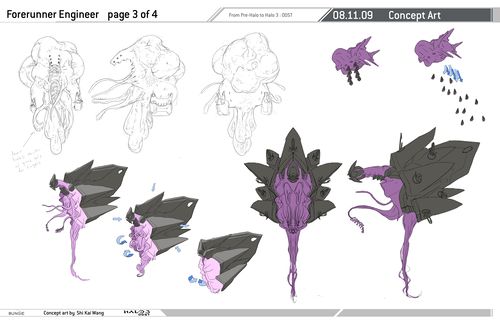 Q. Were there any sticking points or frustrating moments involved with creating the Engineer?

A. We didn’t have the technology or the time to make them feel right in Halo: Combat Evolved, so we had to cut them. That was frustrating. I’m really happy that they made a comeback in Halo 3: ODST, in more ways than one. I had to go back and redesign it to fit the gameplay, but giving it more thought also made the Engineer a more in-depth character. We now have the tools and capabilities to make him exactly how he was originally envisioned. So let’s not look back in anger, shall we? 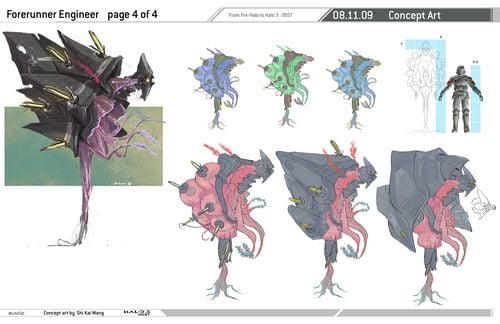 Q. Is that an Oasis quote? You know what, don’t answer that. Try this one: were there any elements of the Engineer’s design that you were really excited about that didn’t end up working for technical, fictional, or gameplay reasons?

A. When the redesign for Halo 3: ODST came along, we originally wanted the Engineer to suck its limbs and head into a cocoon shell and have it float away in distress or cower in fear. We didn’t fully achieve that look or feel, partly because we didn’t figure out a good solution for how the animations would work alongside gameplay. It does do something similar, but ultimately it’s a scaled down version.

Q. When you look back over the small catalog of concept art that ultimately makes up the Engineer’s evolution, do any of the images stick out for one reason or another?

A. Not sure if this would be appropriate to mention, but one of the concepts that actually made it to the Halo engine was Engineers with, how do you say, giant sacks below them. I think originally my intention was that since they were floating creatures, they would need some sort of counterweight to ground them. But now looking back at those designs, it’s quite obvious that I was a very young kid that had some very subliminal influences going into what I designed. I’ll let people explore that comment themselves.

Um, yeah. On that note, let’s close up shop and leave ‘em hanging. If you've just read through this brief character study and want to explore the images we have on hand in this article, go ahead and click on any of the concept art sheets for higher resolution copies.

Thanks for the insight, Shiek.