For the Halo installation, see Installation 05. For the achievement, see Delta Halo (achievement).

In Halo 2 Vista, upon completing this level on Normal or higher will reward the player "Delta Halo" Achievement and 30 Gamerpoints.

After helljumping onto Halo in an HEV, John-117 fought his way through Covenant forces to reach the temple where the Prophet of Regret resides. This is the only Halo 2 level where the player will be aided by ODSTs and is also the first level the Sangheili Honor Guardsmen are fought.

The Prophet of Regret's flagship exits slipspace near Delta Halo with a debris field and the UNSC In Amber Clad following in its wake.

A Slipspace rupture appears in space. Solemn Penance comes out, followed by some debris from New Mombasa and the UNSC In Amber Clad.

Cuts to the bridge of In Amber Clad:

Pan over to a room lined with HEVs:

Johnson is inside a HEV pod, smoking a smashed cigar.

In the pod, John-117 looks at Halo on his viewscreen.

Johnson knocks twice on the hatch of John's pod as he is walking by, John-117 pounds back in acknowledgment.

The pods drop, and they hell-jump onto Halo.

On Halo, an Unggoy and a Kig-Yar notice the pods flaming and streaking down towards them. The Kig-Yar snarls in alarm. He flicks his wrist, and his energy shield snaps on. The Unggoy boards a Shade turret and shoots at the pods, and soon another Shade starts firing. The pods land, John-117 breaks the cover open on his pod, scanning the area with an SMG.

John-117 takes up a Rocket Launcher out of his pod and hefts it.

The team comes under fire from the Shades.

The team destroys the Shades.

The team attack the Covenant troops around a nearby structure, which includes several Sangheili and a Kig-Yar Sniper. Eventually they clear all hostiles and hold position in the ancient structure.

A Phantom drops off troops. The Chief eliminates them. 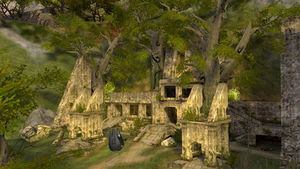 A second Phantom drops off troops. John-117 eliminates them as well.

On Legendary, a third Phantom drops off a squad of three Stealth Sangheili.

If the player stays and waits for the Warthog:

A Pelican arrives, carrying a Warthog and two Marines, if the ODSTs have been killed.

If the player proceeds up the path without waiting for the Pelican to arrive:

The Pelican drops off the Warthog.

They cross a ridge to reveal a panoramic vista of a lake with the Temple in the middle of it.

Later, John-117 comes across a bridge held by the Covenant.

Several Shade turrets open fire on the team and Ghosts soon appear to provide support. Eventually the team eliminate all hostiles, including a lance of Kig-Yar. They enter a structure and eliminate another lance of Covenant in the main room. A hologram of Regret hovers above the center. The Chief activates the switch and the bridge extends over the gorge.

If the player stares at Regret's hologram, then walks up to the ODST:

If the player keeps staring at the hologram:

If you keep staring at Regret's hologram:

If the player chooses to go on foot, Warthog, or Ghost: A pair of Wraiths across a bridge.

John-117 eliminates the Wraiths as well as a group of Banshees and Ghosts and passes through a multitude of Forerunner ruins. Large numbers of Shade turrets, Ghosts and Covenant infantry fall to the Spartan's onslaught. Eventually the Chief emerges from the ruins.

You Break It, You Buy It[edit]

More Shades, Ghosts and ground troops attack the team, but are repelled. As the Chief and his team attack the structure:

The Pelican drops some Ordnance pods for the team, as well as at least one Marine. In response to the human presence, more Covenant troops begin to emerge from inside the structure.

A massive battle is fought between the human attackers and the Covenant defenders, but with the help of the Master Chief, the UNSC forces are victorious.

If the player lingers outside the structure:

As they progress into the building, they eliminate several more Covenant troops. The team soon come across another hologram of the Prophet of Regret.

The team press on, engaging another pair of carbine wielding Sangheili and a lance of Unggoy and Kig-Yar.

Off The Rock, Through The Bush, Nothing But Jackal[edit]

The team continues through a narrow cave, and finds more Covenant troops patrolling near a waterfall flowing into a creek.

The team take the Covenant troops by surprise and easily mow them down. Several Kig-Yar Snipers and a swarm of Yanme'e try to stop the UNSC forces, but fail. A final pair of Sangheili defend the appoach to the next area, but they too are killed. The team continues through a narrow crack. They eventually reach the first series of structure in the lake.

The main structure's upper walkways are patrolled by a pair of Kig-Yar Snipers. A swarm of Yanme'e attempt to stop the humans, but all Covenant troops eventually fall to the Chief and his team.

If the player waits or backtracks:

The Envy Skull is found on this level.

Note: this is similar to the Hidden Sniper Rifle, which can also be found on Delta Halo. Near the end of the level, after the area with the waterfall and snipers, you will go through a tunnel and come out onto an open ledge. There will be several buildings in the distance and if you still have a Sniper Rifle or Beam Rifle, you can pick off several Unggoy, Kig-Yar, and Sangheili. Below the ledge you are standing on is the main ledge which has weapon drop pods, however if you turn right and go along the wall, you'll reach a point where you can jump up and walk along above the main ledge. This will deposit you on a hidden ledge covered in thick vegetation. On the ledge is a dead ODST and a Sniper Rifle.